Just a quickie...
The Dig Issue is now on Twitter! You can follow my tweets here: www.twitter.com/thedigissue
Posted by Nicole at 1:28 pm No comments:

Spring has sprung in April

I always seem to think I've got loads of time before I need to start sowing anything and then panic when I realise that it's April already and I haven't planted anything! This has been another one of those years.

Our harsh winter died down pretty quickly and we have been enjoying the warmest April on record since... erm... well, a long time ago! It has been a bit of a distraction to be honest. With Dave in Thailand for 3 weeks I've been digging after work whenever I could fit it in. When the thermometer hits 23°C you do tend to favour the local pub's beer garden instead tho. Who can dig in that heat?

Distractions aside I got a couple of rows of broad beans planted and my apache spuds in the ground as planned. They've popped up nicely within the last 3 weeks so I'm rather pleased with them so far. I've strimmed the grass twice this month and decided not to wage war with the dandelions. (Although they still make me mad)

Most of the beds are ready for planting although we are losing a battle with the couch grass encroaching onto the beds as the wood is disintegrating. We may need to make some drastic decisions next year.

I had a turf war with a spider over the course of a week too. One had decided to make a ginormous web across the greenhouse door that I walked into 3 times! I tore it down every time I went into the greenhouse and by the next day there was another one! I am not kidding - this happened about 7 times. Clever yet stupid creature.

On a positive note, I've managed to get my hands on an old Nikon D40 DSLR and I've fallen in love with it. Great camera for photographing plants and bugs. Might have to invest in a new one when I'm feeling a bit more flush with cash! All the photos in this blog post have been taken with the Nikon.

This is quite a late posting but I just have to mention this little gem of a place I visited earlier in the year.
In March I visited Rode Hall in Cheshire. It's quietly tucked away in the country but a real treat if you manage to get there early in the year for the snowdrops.
Now I have to admit that I'm not really into flowers just yet. (Apart from sunflowers) For me it's all about eating what you grow but it was a really fabulous place to visit and the kitchen garden really caught my eye. I don't know how many people look after the gardens but everything looked so neat that I'm sure there must be an army of gardeners at hand?! There were onions hanging from the previous years crop and the rhubarb was incredibly early and luminous pink. The ground was freshly turned with crumbly, chocolate-like soil and the greenhouses were full of freshly potted plants ready to go out in spring. The amount of space they had allocated for just kitchen gardening was immense. (2 Acres apparently!) There is even a tiddly little house on the site of the kitchen garden for a knome gardener to live in. It just oozed quintessential English kitchen gardens from the Victorian era. Lovely.
You can find out more about Rode Hall on their website. www.rodehall.co.uk
Can't wait to go back in the summer! 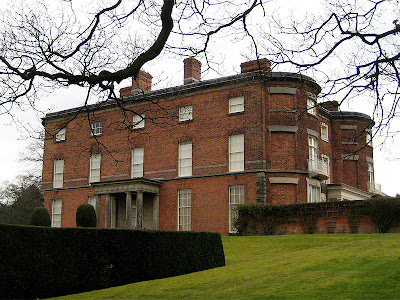 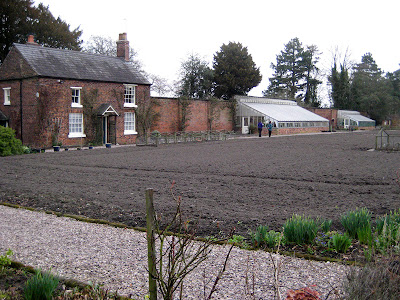 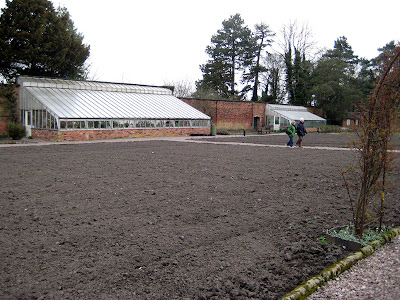 Kitchen Garden (So much space!!) 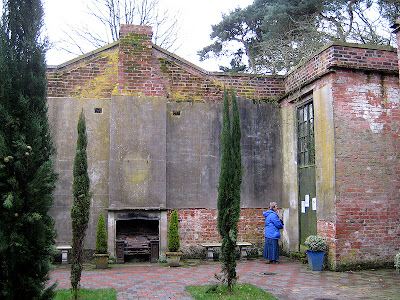 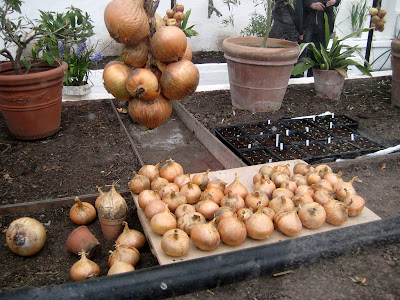 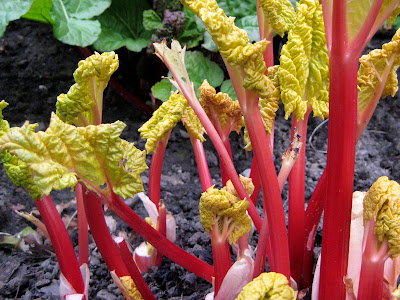 Rhubarb
Posted by Nicole at 7:17 pm No comments: