Last week and this week I dug the ground for a couple of hours. I tried to make a bed but realised that the bind weed and couch grass have already taken over the allotment again after we dug the majority of it up back in January! It's an absolute nightmare! Stones seem to also be breading from somewhere....every movement with the fork or spade brings on a "clang!" as I hit each one. (I ended up tidying up the greenhouse instead!)
The good news however is that home growing from seed is going fantastically well! I think I'm addicted to growing anything I can from seed! I've got 8 tall and strong sunflowers on the go plus some tomatoes (moneymaker) which have just sprouted! (12 have popped up so far)
3 Rosemary cuttings are rooting in very slowly and I have some rocket & lambs lettuce seeds which I don't currently have space to grow at the mo. (Think my housemates will kill me if I plonk yet another seed tray on the windowsill!)
Predicted rain tomorrow but only a couple of weeks until the clocks go forward....not that I'm counting! (26th by the way for BST!)

Edit: I've just been given a tip about growing lettuce. Apparently they don't have large roots so you can simply put a pot in the ground for it to grow in and then when you want to harvest it - just pull up the plant and keep it indoors inside the pot and then it won't wilt. 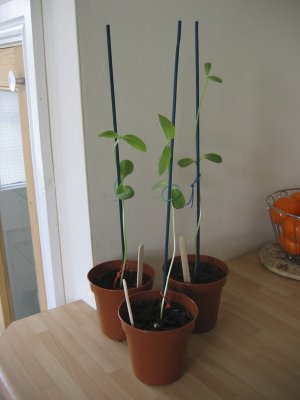 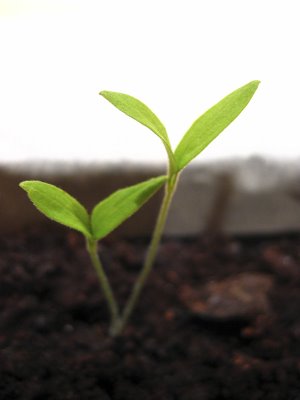 Tomatoes - The first seedlings!
Posted by Nicole at 11:17 pm